Colorado Blue Spruce trees are commonly planted in Alberta due to their reliable growth, thick canopy, and distinct blue tinged green color. That color has been changing lately and not in a good way. First, the needles start to turn purple, then brown, before falling off! Needle discoloration can be attributed to many ailments but the common culprit in 2021 is Needle Cast. In this post we will explain the problem, the symptoms, the victims and what can be done. We will also touch on a less common needle fungus in Alberta called Needle Rust. Needle Cast or Rhizosphaera is a fungal disease that infects the needles of conifers and comes in many varieties. R.Kalkhoffii is the ring leader of these parasitic fungi as it infects Spruce trees and causes major defoliation.

Needle cast infections usually start in the lower canopy in needles that are one year old or older. In mid to late summer early infections can be identified by the yellow mottling of needles. The yellowing soon turns to brown or, in the case of Colorado Blue’s, purplish brown. These needles will die and fall off over the years, with some staying attached to continue spreading the infection. If the infected branches are left on the tree and conditions are favorable the infection will spread up and around the tree.

The fungal spores of needle cast can be seen with a magnifying glass. Oval black bumps can be seen in neat rows on all sides of infected needles. The fungus overwinters in dead needles and spreads its spores in the spring under warm and wet conditions. The warmer and wetter the spring, the more aggressive the fungus will be. Early infection is identified by yellow mottled needles on the inner canopy, usually on the lower branches but can be found any where in the tree. The infection starts on needles that are least one year old. As the infection progresses though the summer the needles will turn brown or purplish brown, in the case of Colorado Blue Spruce. The needles will die and fall off, leaving the interior bare while new growth is on the tips of the branches.

The infection is more visible in early-spring/late-winter before the trees put out new buds. It is at this point that the tree can look completely brown or purple.

Smaller trees, those less than seven metres (or twenty-one feet), will eventually decline due to needle cast since the defoliation advances faster than the tree can grow. Large trees can also die from needle cast but it is usually due to other ailments causing stress for the tree such as insects like sawfly, spider mites, or pitch moth. Poor growing conditions can also prevent the tree from surviving infection.

Needle cast can infect all conifers, with each species of the fungus infecting different species of conifers. Therefore, diversity is important in landscaping as a needle cast that infects Pine trees will not infect Spruce trees or Cedar trees. The main victims in Alberta are Colorado Blue Spruce. This tree is planted throughout the province and we have a large mature population. Colorado Blue Spruce trees are very susceptible to R.Kalkhoffii, while White Spruce get infected to a lesser degree and Norway Spruce also get infected although they are somewhat resistant.

What Can Be Done

As with nearly all ailments the first line of protection is proper placement and good growing conditions. A tree that lacks sunlight, water, or the correct soil will have less vigor to outgrow needle cast infections.

All fungal infections need moist conditions to spread, so maintaining good airflow in your trees’ canopy can help slow the spread. Raising the lower canopy off the ground just enough to allow air to pass through can help slow down infection. Shaving and shaping the canopy of spruce trees creates the ideal conditions for needle cast because the interior canopy will get very little air flow and or light. Avoid watering on the needles directly as this will help keep conditions ideal for fungal development and can even help it spread faster.

Infected branches can be removed to slow the spread. Needles need to be removed from site, burned, or buried in a hot compost pile.

Fungicide can be sprayed to try to control the fungal spread and has varying success in reducing or eradicating infection. Fungicide sprays used should have active ingredients with a copper base. Fungicide treatments will need multiple sprays to address the infections throughout its development.

Having a diverse variety of trees in your landscape will help to ensure that entire groups of Spruce cannot become infected with the same fungus. Trees that are grown in shade or very close together will see faster and more aggressive infections.

Needle rust is another fungal infection that attacks Spruce trees and is especially hard on Colorado Blue Spruce. Chrysomyxa Weirii is a fungal disease with similarities to needle cast but is less common because it needs a co-host in the area to spread effectively. Needle rust needs Labrador Tea plants to progress through its development. While needle cast targets the trees old growth, needle rust targets the new growth. Needle rust infections are found on the outer canopy and have a rusty brown or even orange color. Needle rust rarely kills its host unless the tree is also battling other ailments like spider mites, sawfly, or needle cast. Since needle rust infects new growth rather than old growth it will ruin the trees’ aesthetic value over time and can stunt or deform its growth.

Control measures for needle rust are similar to needle cast, with the addition of trying to ensure no Labrador Tea plants are nearby. 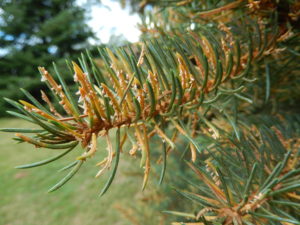