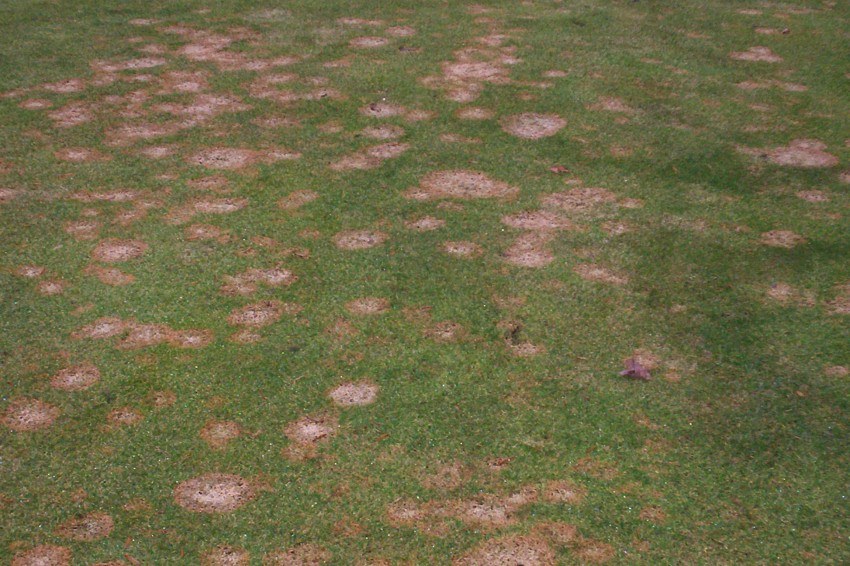 Snow mold is a type of cold weather fungus that can be found growing on lawns shortly after the spring thaw. It is characteristically found as a white, grey, or pink fuzz covering the surface of the turf and often grows in small circles or patches. White and grey snow molds are more common, and only affect the blades of grass at the surface. Pink snow molds are more aggressive, attacking the crown and roots of turf grasses and can lead to more severe turf damage if left untreated. These molds are commonly found in areas that retain moisture and are among the last to thaw out in the spring, such as along shoveled walkways, shaded areas, and where snow removal piles were left over winter.

Like other varieties of fungus’s and molds, snow mold thrives in areas that are moist and rich in nutrients. Lawns that were treated with nitrogen rich fertilizers too late in the fall, or lawns that were left to grow too long before the winter freeze, are often affected by this fungus.  Decomposing organic matter, such as leaf litter, thatch (dead blades of grass), and pet waste can also contribute to the nutrient rich environment in which snow molds grow. Another common cause is poor soil quality and water drainage. Snow mold requires plenty of moisture to thrive, and compacted soils with poor drainage are ideal for retaining the moisture needed for fungal growth.

Snow mold is not only unsightly and damaging to your lawn, but also damaging to your health.  Breathing in snow mold spores can cause allergic reactions similar to those of hay fever, and includes symptoms such as sneezing, runny noses and itchy or watery eyes. People who suffer from asthma should avoid contact with snow mold if possible.

Luckily, snow mold is easily treated and there are many ways to prevent its yearly reappearance. Firstly, it is important to continue mowing your lawn throughout the entirety of the fall until the first snowfall or freeze. For extra protection, and to reduce moisture retention in the spring, lawns can be cut slightly shorter than usual on the last expected cut of the season. Fertilizers that are richer in potassium, and contain less nitrogen, should be used later in the growth season. In the fall, leaf litter, pet waste, and other debris on turf areas should be removed before they have a chance to breakdown and start decomposing.

Yearly dethatching and core aeration are the two most effective preventative maintenance solutions for discouraging snow mold growth. Dethatching in the spring removes the dead blades of grass from the previous summer’s growth, and yearly core aeration prevents soil compaction and improves water drainage. Both dethatching and core aeration are crucial for reducing moisture retention and improving air flow, allowing your lawn to breathe and dry out quicker. Reducing moisture and nutrient availability in the early spring season is the key to preventing future outbreaks of turf molds and sets your lawn up for success!

At Kentucky Blue Grass, our spring cleanup services always include dethatching of all common turf areas and removal of the previous year’s leaf litter. Backpack blowers are used to loosen up compacted blades of grass in areas that receive heavy foot traffic, removing mats of dead or dying grass, as well as leftover fallen leaves and decaying vegetation. Specialized lawn mowers with bagging systems are used to remove the dead blades of grass from the previous year’s growth, giving your turf the space it needs to thrive. Our spring cleanup services gives your lawn a head start on the growing season, and paired with our core aeration services, allows your lawn to bounce back and grow thicker and greener.